The events of recent days, along with topics I’ve been studying on my own, have brought to mind the title of Richard M. Weaver’s classic book: Ideas Have Consequences.

Weaver recognized a decay in Western civilization; the culture had lost its center and desperately needed repair. As a result, In Ideas Have Consequences (1948), Weaver both diagnosed the problem and suggested a solution. He explains:

First, I present an account of that decline based not on analogy but on deduction…. Second, I go so far as to propound, if not a whole solution, at least the beginning of one, in the belief that man should not follow a scientific analysis with a plea of moral impotence. (1)

I agree with Weaver’s diagnosis. But his solution? Read the rest of this (admittedly heady) Ideas Have Consequences book review to get my perspective. 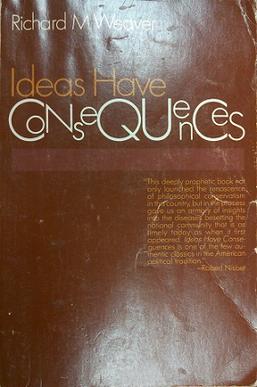 Weaver begins his diagnosis in Ideas Have Consequences by claiming that reason alone is inadequate and requires a foundational metaphysical dream. He then rejects the idea that everyone is equal and asserts that a functional society needs structure. Specialization is inadequate, he claims, trumpeting a return to the holistic outlooks of ages past. Next, he posits that egotism has wrecked work and art, and he denounces the media, which promotes an unrealistic “world of evil and negation” (104). These symptoms culminate in the spoiled-child psychology, the logical result of telling someone he can know, do, and have anything.

Weaver’s proposed solution begins with a restoration of dualism, and he considers the right to own property to be a metaphysical rallying point. He then affirms the importance of language, rejecting that words are meaningless, and he trumpets a return to piety and justice. Weaver concludes that a necessary restoration of civilization will come at a high price.

Ideas Have Consequences is refreshingly contrary and full of conviction, and Weaver’s diagnosis of society’s symptoms is particularly relevant today. Weaver supports his thesis with clear organization and a logical progression of ideas. Along the way, he supports each point with specific, topical examples, and he charts the source and evolution of each problem and solution.

Weaver is at his best when he dismantles poor logic. For example, Weaver’s discussion of truth’s timelessness is refreshing. Since so many contemporary debates pit conservatives against progressives, two temporal labels, Weaver helpfully argues that value “[is] not affected by the passage of time” (52).

Nevertheless, the book has deficiencies. Many topical examples are dated and lack contemporary application. Also, Weaver sometimes paints with overly broad strokes and seems blind to his own prejudices. Both elements meet in his critique of jazz, which assumes that syncopation has spiritual significance and speaks condescendingly of “the Negro’s spontaneous manifestation of feeling” (84). Similarly, his fondness for the pre-Civil War American South glosses over the era’s injustices. Moreover, though he staunchly condemns relativism, he selectively argues from the Bible, Greek mythology, and philosophy as if they were equally valid. And though he defends words’ definitions, he blatantly misapplies the biblical understanding of logos to meet his rhetorical needs.

Finally, his proposed solution is ultimately unsatisfying, Repairing society requires more than property, words, and virtue; it requires a Savior. Thus, although the book correctly deduces the problem, it lacks a solution. And many would argue that modern culture shows that the solution escapes us still.

Nathaniel is the pastor of Cedar Rock First Baptist Church in Castalia, NC and the Editor and Content Manager at cfc.sebts.edu.